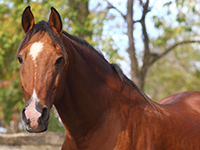 Tango was about 22 years old when he and Marley were rescued and when they came to the farm on August 24, 2018. Tango and Marley were both part of a high-profile rescue case in NJ that had become overwhelmed with too many horses and not enough funds to care for them. Mylestone reached out to the woman running the rescue and offered to take two geldings. Longtime friends to MER, Patty and Bill, offered to quarantine both horses in South Jersey, and in a month's time the two boys were ready to join us here on the farm.

Tango and Marley were starved and in poor condition when they arrived - both needed to gain between 150 and 200 pounds. As per our vet, they were started slowly on a refeeding program. Due to a lack of farrier care, Tango's hooves had grown so long they were starting to curl upwards.

Although they once had a long road ahead of them, look at them now! The two boys are very attached to each other though Tango tends to be a bit bossy to Marley. He likes to flirt over the fence with Piper and Cleo who live out next to him, and thrives on routine.