Holly is a large pony, about 14 hands and a Snowflake Appaloosa. She's still a youngster, just about 20 years old in 2021. Holly is a very friendly girl, and enjoys the attention of people.

When she was about a year and a half old, we purchased her from an animal hoarder in Hunterdon County, along with three minis, to save their lives. One of the minis was adopted, and the other two, Lucy and Patty, are here at the farm.

When she was 3, we were ready to start training her, but she exhibited some abnormal lameness issues. It was discovered that Holly has Wobbler's Syndrome, a neurological condition that results in her lameness and not being ridable. She is an adoptable horse, but only as a companion.

In 2014 she had a hairline fracture in her coffin bone on her left front hoof. She was on stall rest for many months. She was not happy about being in, but healed completely and couldn't wait to be outside again with her best friend, Woody. The two get along famously. Should Holly be considered for adoption, we would love to see the two of them adopted together.

Our lovely Holly would love some friends she could count on - will you sponsor Holly? 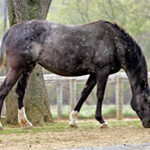 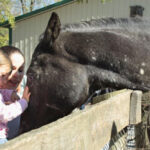